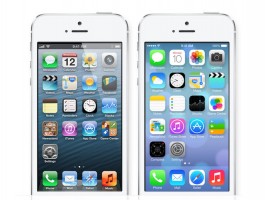 From the moment it’s first installed, it’s different. Some like it, some hate it, but it’s here to stay. Apple has joined the flat design led by Microsoft with their Metro UI and Google’s Android interface. Does this mean Apple has lost it’s direction? Once a company to lead by example, it is now following other’s design principles. There’s nothing ‘Apple’ about iOS 7. There’s no doubt that Apple can still make great looking hardware however, but we haven’t seen anything really new for a while. Yes, there’s fingerprint sensors and a new thinner iPad 5 on the way, but where’s the ground breaking stuff? The iWatch with a curved display that has been rumoured for so long? What is Apple doing to declare that it’s still different in the mobile world?

A New Direction for Apple?

Maybe the addition of ex-Burberry CEO Angela Anrendts will change the direction of Apple? She certainly changed things at Burberry. Hopefully she starts with the motion sickness problem affecting 25% of iOS 7 based iPhone users.

It’s not all bad.

Motion sickness aside, there’s a lot of reasons to actually install iOS 7. Lots of settings that were previously hidden deep in the OS are now easily accessible through the settings control centre (pull up from the bottom of the screen) and the notification centre is a lot more useful now (accessed by pulling down from the top of the screen) with categorised notifications (what’s happening today, missed calls etc). Safari’s a bit neater too, with page flip mode for viewing open web pages. Siri’s much better too and Airdrop is pretty cool.

It takes time, but you won’t want to go back

iOS 6 was looking a bit tired and iOS 7 may make you want to get back under the duvet with its 80’s style loudness & bright colours, but you’ll get over it. Hopefully.