Designing a mobile app to use gestures

Apps have one unique advantage over websites in that they are ideally suited to use gestures. Most modern mobile operating systems such as iOS and Android have gesture recognition engines in order to translate a selection of screen events into higher level gesture events that are easier to use.

Gestures can add an extra level of interactivity to your app and take it beyond something that feels like a webpage on a small screen to something that is quick & effective to use. Common gestures include:

Making sense of the sensors

Sensitive accelerometers in modern devices allow gyroscopic gestures to be used as well.

In summary, when designing an app, pay special attention to the way gestures can be utilised to improve your app and enhance the way your users can interact with it.

One of the common requirements for anyone getting an app developed is usually “I need it on the app store right away”. Our app design-build-test cycle (regardless of whether it’s an iOS or Android app) is rarely less than 8 weeks, more in the region of 12-14 weeks from initial concept to approval by the target app store (the Apple App Store is currently averaging 640 new app approvals a day). There’s a lot to do, after all: designing the UI, wireframes, developing the server code, synchronisation code, developing the UI, we could go on. All that has to be done, and it has to be done well. Not just to get through the app store, but to make the what’s been conceived a killer app.

Based on a survey of 100 iOS, android and HTML5 developers, the average time to develop a mobile app: 18 weeks. The same time as it takes to build 1.3 Boeing 777’s. Here’s an interesting infographic on what’s involved from the company that did the survey, Kinvey (click the image to go to their website to read more): 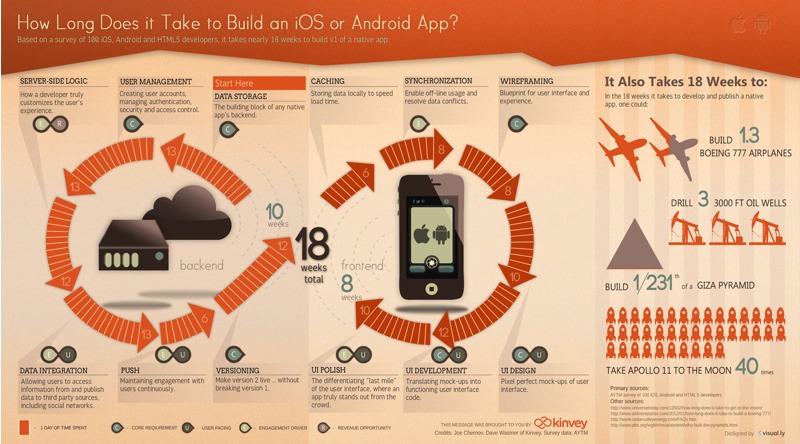